Copland's personal qualities of generosity, gentleness, and a sense of measure live on at Copland House.American Record Guide

On a rocky hill atop three acres of woodland in the lower Hudson River Valley hamlet of Cortlandt Manor, less than one hour north of New York City, is “a dwelling of particular historical interest” (The New York Post) – the home where Aaron Copland, one of the most celebrated and profoundly influential musical figures in American history, lived and worked for the last thirty years of his life (from 1960 to 1990). Built around 1940, the prairie-style home is spacious yet unassuming, and reflects Copland's rugged elegance and natural dignity. Now a National Historic Landmark and an Official Project of the federal Save America’s Treasures program, Copland House is the only composer’s home in the United States devoted to nurturing and renewing America’s rich musical heritage through a broad range of activities. 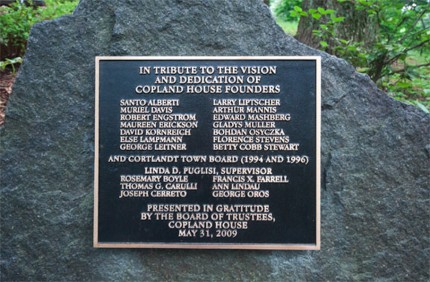 A few years after Copland's death in 1990, a coalition of local townspeople launched a genuine grassroots movement to preserve and restore this historic residence as the living, enduring embodiment of his seminal artistic and personal legacies and lifelong advocacy of American composers. Following extensive physical renovations, Copland House became operational in 1998 as a 501(c)3, not-for-profit creative center for American music, built upon three core programmatic pillars. Its support for composers includes coveted, all-expenses-paid residencies; post-residency awards and performances that further advance their work; fiscal sponsorships; and composer commissions. Its public programs include concerts throughout the U. S. by its touring resident Music from Copland House ensemble, as well as recordings, broadcasts, and Webcasts; film screenings and visual exhibitions; and an annual performance series at its vast new satellite venue at the historic Merestead estate in nearby Mount Kisco. Its educational programs include in-school and on-site student activities; guided House tours for school, senior, and community groups; free online reference services; and seminars, master classes, lectures, and workshops exploring the creative process. Intimate concerts, musical gatherings, open houses, and other events take place at Rock Hill when composers are not in residence. All programs and activities are supported by the tax-deductible contributions of the broad-based, nationwide Friends of Copland House. The noted pianist and recording artist Michael Boriskin was appointed Artistic Director of Copland House in 1998, and became Artistic and Executive Director in 2003. 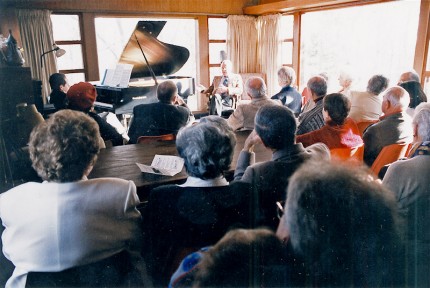