Application deadline: PLEASE CHECK BACK WITH US! 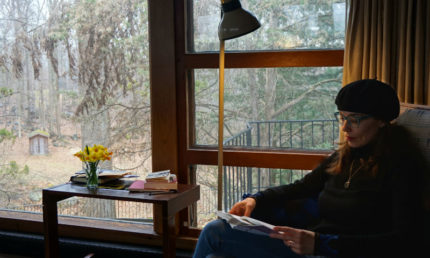 The Sylvia Goldstein Award was created in 2003 to help support the recording or performance of an outstanding work written at least in part at Copland House by a Copland House Residency Awards' composer. The prize is now given in odd-numbered years, and consists of a cash award of up to $7,000. Named to honor the longtime Boosey & Hawkes executive and her lifelong devotion to assisting composers, the award was created through a major bequest by Ms. Goldstein to the Aaron Copland Fund for Music, and is implemented and administered by Copland House. The sole criterion for the award is the artistic quality of the submitted compositions, as reviewed by a rotating panel of eminent musicians.

Only recipients of the Copland House Residency Awards are eligible. Compositions in any medium begun, worked on, completed, and/or orchestrated during Copland House residencies may be submitted. Composers will be allowed to apply with only ONE composition of their choice per residency, even if they may have worked on several while at Copland House.

Eligible composers should complete and submit the brief application form online and accessible below, with required score and recording, by 11.59pm on the deadline date, as noted above. A score should be submitted now, even if previously sent, in compliance with our Residency agreement. MIDI realizations are acceptable, but not recommended, if live or studio recordings do not exist.

The precise type of support (either performance or recording) most beneficial and appropriate to the work chosen will be determined in consultation with the composer. Award funds will be paid directly to the recording company or performing artist or ensemble. In many instances, this award will not cover the entire costs of performance or recording; it is intended to recognize outstanding works, stimulate interest in them, and champion their dissemination. Award funds will be held for up to five years from notification of the award. For further information, contact us.

L'alma respira for orchestra; James Grant, Such Was the War for baritone, chorus, and orchestra
Jury: Martin Bresnick, Bright Sheng, and Joan Tower