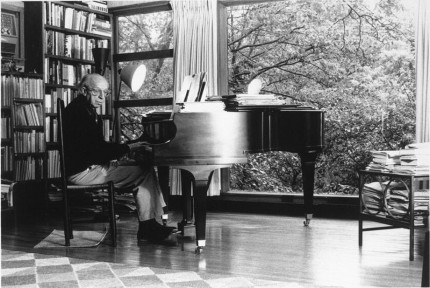 Aaron Copland at the Piano

1900—Born on November 14 in Brooklyn to Sarah Mittenthal and Harris Copland, the youngest of five children (Ralph, Leon, Laurine, and Josephine)

1909—Begins to make up songs at the piano

1917—First public performance as a pianist

1921—Enrolls at newly-established American Conservatory at Fontainebleau in May; attends harmony class of Nadia Boulanger and begins composition studies with her in October

1925—First major performances of an orchestral work, Symphony for Organ and Orchestra at Aeolian Hall (Nadia Boulanger, organist, with Walter Damrosch conducting the New York Symphony) and in Boston (with Serge Koussevitzky conducting the Boston Symphony Orchestra); first visit to MacDowell Colony to work on Music for the Theatre; receives the first-ever Guggenheim Memorial Fellowship (renewed in 1926); writes first of many articles for Modern Music

1927—First major performance of Copland as pianist, World Premiere of his Piano Concerto (composed 1926) with Koussevitzky and the Boston Symphony; begins lectures at New School for Social Research, New York (continuing for ten years, eventually developing some of these into his book What to Listen for in Music)

1932—First visit to Mexico, arranged by Carlos Chavez, which includes first all-Copland program (organized by Chavez at the Conservatorio Nacional de Music on September 2nd: Two Pieces for String Quartet, Piano Variations, Two Pieces for Chorus, and Music for the Theatre); joins the Board of Directors of the League of Composers; joins a social and professional collective called Young Composers’ Group (including Arthur Berger, Henry Brant, Lehman Engel, Vivian Fine, Bernard Herrmann, Elie Siegmeister, and others) 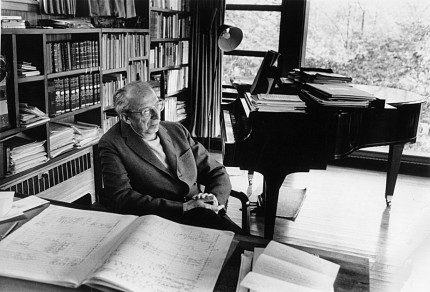 Aaron Copland at his Desk

1935—Teaches for the first time at Harvard, replacing Walter Piston on leave in spring semester; organizes five concerts at the New School, each devoted to the music of one composer (Harris, Thomson, Sessions, Piston, and Copland)

1937—Composes The Second Hurricane, a "play-opera" for the Henry Street Settlement Music School in New York City, directed by Orson Welles, to be performed by children and adults

1938—Publisher becomes Boosey & Hawkes, to which he was recommended by Benjamin Britten; helps to establish American Composers’ Alliance (serving as President between 1939 and 1945); helps to found Arrow Music Press (incorporating Cos Cos Press) with Engel, Blitzstein, and Thomson

1939—Writes first film score to The City, a documentary by Ralph Steiner and first score for a feature film, Of Mice and Men; helps to found American Music Center; publishes first book, What to Listen for in Music

1940—Invited by Koussevitzky to teach at the first summer of the Berkshire Music Center at Tanglewood (continuing until 1965, and including various administrative positions)

1942—Completes A Lincoln Portrait, commissioned by conductor Andre Kostelanetz, and Fanfare for the Common Man, and composes the ballet Rodeo, commissioned by Agnes de Mille; elected to the Music Department of the National Institute of Arts and Letters

1944—Receives Academy Award nomination for his film score to The North Star; returns to Harvard in the spring for five talks as Horace Appleton Lamb Lecturer

1945—Wins Pulitzer Prize in Music and the New York Music Critics Circle Award for Appalachian Spring, a ballet by Martha Graham composed in 1944

1946—Completes one of his largest works, Symphony No. 3 (begun 1944), which wins the New York Music Critics Circle Award; elected a member of ASCAP

1948—Becomes Director of the League of Composers (remaining until 1951)

1950—Wins Academy Award for Best Original Musical Score for the film The Heiress; sixth visit to the MacDowell Colony, during which he begins work on the Piano Quartet, his first 12-tone work; completes Twelve Poems of Emily Dickinson

1951—Receives Fulbright Fellowship for six-month stay abroad, including a short residency at the American Academy of Rome and first trip to Israel; conducts work by another composer for the first time (Diamond’s Rounds, in Italy); gives Charles Eliot Norton Lectures at Harvard (first native-born American to hold Poetry Chair), published in 1952 as Music and Imagination

1952—Begins work on The Tender Land; buys his first house, Shady Lane Farm in Ossining, where he lives for eight years

1953—Becomes embroiled in Washington’s anti-Communist hysteria, and is subpoenaed to testify at McCarthy Congressional hearings, as a result of which several of his engagements are canceled; first book about Copland published, written by composer-critic Arthur Berger

1954—World Premiere on April 1 of The Tender Land at the New York City Opera; elected to membership in the American Academy and Institute of Arts and Letters

1956—Awarded Gold Medal of the American Academy and Institute of Arts and Letters; receives first Honorary Doctorate (from Princeton, U.); six months in Europe

1960—Buys Rock Hill in the Town of Cortlandt, which was to be his home for the remaining 30 years of his life; fourth book published, Copland On Music

1962—Writes Connotations for Lincoln Center Inaugural Concert by the New York Philharmonic; composes Down A Country Lane, is published in Life magazine on June 29

1965–66— Wrote, hosted, and performed on a 12-part public television series, Music in the Twenties

1970—Receives Commander’s Cross of the Order of Merit from West Germany and the Howland Memorial Medal from Yale University; awarded membership in Institut de France and Britain’s Royal Philharmonic Society

1971—Composes the Duo for Flute and Piano, his last important work

1975-76—Gives interviews to Vivian Perlis for her Oral History Project in American Music at Yale University, which develop into their collaboration on Copland’s autobiography

1986—Awarded both the Congressional Gold Medal (by “act of Congress,” one of America’s highest civilian honors) and the National Medal of Arts (bestowed by President Ronald Reagan)

1989—Second volume of memoirs published (Copland: Since 1943, with Vivian Perlis)